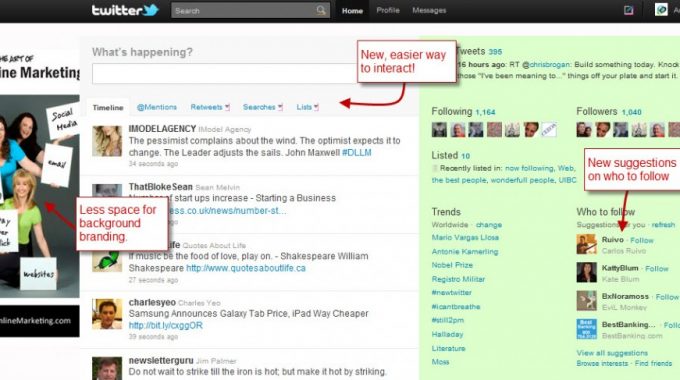 Have you seen #newtwitter? Click the link to see the video. Next time you log in to your Twitter account, look up.  Do you see a message saying, “Pssst … the new version of Twitter is here?”  Check it out because Twitter just became more user friendly than ever. It is still the same Twitter you have grown to love, just better. If you are using a third party tool like HootSuite, Tweetdeck or Ping.fm to manage your Twitter accounts, the change won’t affect you much at all.  However, studies have shown that a vast majority of Twitter users are using the web version. New Twitter Features The new Twitter offers a two-column layout.  When you want to view someone you are following all you need to do is scroll over their tweet and click on the arrow that appears. When you do you won’t be taken to another page like before, now it appears in a different column on the right.

Your familiar stream of Tweets is still there, but now it is never ending. The new design allows you to use the scroll bar to scroll through a never ending feed of Tweets. It may take a few seconds to load, but I am yet to reach the end (because there is none). The word on the street is that the new setup is designed to lure people away from third party applications (like HootSuite and Tweetdeck) in order to monetize Twitter through advertising. My assumption is that promotions will be very niche oriented and specialized –much like Facebook. If you are already taking advantage of Facebook advertising, you may find that Twitter advertising is also a fit. There is one downside to the new setup – your background is now barely visible, limiting your ability to brand yourself, and often requiring a redesign of your background.  Twitter’s eagerness to partner with other sites such as Flickr and YouTube enable you to preview pictures and videos right from Twitter.  No need to click away from the site. This may be a step towards eliminating the middle man, but Twitter isn’t quite there yet. Not an end to third parties (yet) The new features are a definite improvement, but they really only apply to people who only operate in the Twitter website. For management of multiple accounts and to follow a search stream, you still need your third party tools like HootSuite or TweetDeck. If already have a favorite, stick with what is most comfortable. If you currently operate in the Twitter website and aren’t totally happy with managing you accounts in the old or new Twitter you might consider a third party. Two of the most popular ones are Hootsuite and TweetDeck. For a comparison of the two check out HootSuite vs. TweetDeck Are you following us on Twitter?

Don’t you love to see the results of your hard work?  Whether it’s raking leaves…

What does having a compelling social media presence mean?