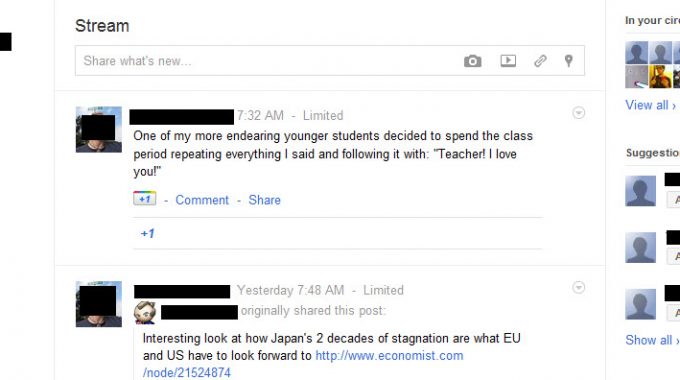 Please Share This
Google and Facebook are at it again. Shortly after Google+ was launched Facebook for Business went live. The timing couldn’t have been better for Facebook since Google failed to include businesses in the model for Google+.

It is Google’s newest attempt at going social. Although user numbers are quickly climbing on an invitation only basis, it remains to be seen if this new social networking site will compete with Facebook. Google’s other attempts – Google Wave and Google Buzz – didn’t even come close, but the new “project” certainly shows more potential.
Google+ incorporated its already widely popular products such as Picasa, Google Maps, and others by making them more socially compatible. Similar to the Facebook news feed, Google+ has a Stream where user updates are displayed. There are four main components of a Google+ profile:

It is an easy to use guide that shows existing users and newcomers how to utilize Facebook for business success. There aren’t any surprises for those who have already been using Facebook as part of their marketing strategy. Instead, the guide breaks down the process for businesses who aren’t using Facebook (or at least not using it well) to promote their brand. The step-by-step guide has four main components:

So who is winning the race to the top? Facebook for now, but that could change very quickly. Google has over a billion users who could potentially join Google+. Facebook has just over a half a billion users, but many of them haven’t been pleased with customer service and privacy concerns.
One major hang-up with Google+, however, is the social networks inability to cater to businesses. Many businesses were ready to jump on board, but instead they were banned from using regular profiles. Google is planning to launch business profiles in the new future, but in the mean time Google+ has received a great deal of criticism for not considering businesses from the beginning.
Facebook Comments
social media marketingFacebook for BusinessGoogle+Small Business Marketing
Related Posts

Optmizing Marketing with Email – A 392% Improvement

In the Social Media Training program we run, we continually remind our students how important it…

The social media landscape is always changing, and this past year proved to be one…

Are you thinking TGIF?!

Follow Us
3 Latest Articles
Categories
Archives
© 2021 The Art of Online Marketing. All Rights Reserved.
Back To Top
×
We use cookies to ensure that we give you the best experience on our website. If you continue to use this site we will assume that you are happy with it.AcceptPrivacy policy