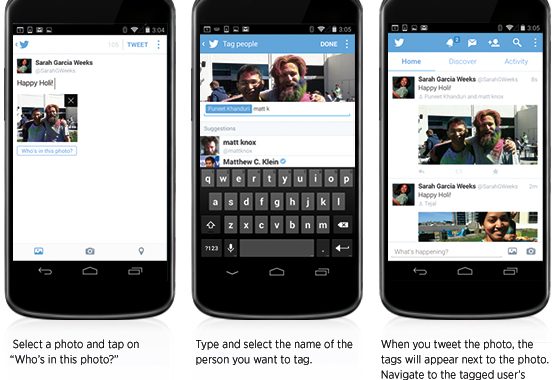 Last week, the micro-blogging platform announced two new features that will delight avid Twitter users — one will allow you to tag up to 10 Twitter accounts in a photo, and the other will allow up to four photos in one tweet.

Sure, these features has been around on other platforms, namely Facebook, but for those who love Twitter, like me, this is sweet music to our ears. Twitter is becoming multi-dimensional in the way it lets people communicate with each other, while remaining true to its nature of being a micro-blogging social site.

· Showcase different angles of products
It used to be that you had to have elementary skills of Photoshop to stitch together multiple images into one, but now you don’t have to waste time with that. Uploading up to 4 pictures at a time on one tweet means you can display four photos at once. Snap up 4 different angles of a product (doesn’t have to be yours) and your followers will see it all in one tweet. Not only did you save time not having to edit images together, but you’re saving your readers their time.

· Quote someone, tag them, and still have room for more characters
Up until this point, if you wanted to tweet out a quote graphic, you had to include their Twitter handle in the original tweet itself. Now, you can save yourself some character real estate on the tweet and tag them in the photo instead. Create a graphic quote of a customer testimonial, or one that you just found uplifting and wanted to share, tag the appropriate handle (or handles) and tweet away.

· Reach your favorite influencers and friends easier
Now that you can tag up to 10 accounts in one photo tweet without giving up precious real estate, you can now spread information faster than before. Have an important message you need to let people know, like a flash sale or a picture of your engagement ring, that you said YES? Tag the people you wish to be informed, and use the new, valuable character space you have left for a special message!

What other creative ways can business owners use these new features from Twitter?

If you need help getting set up on Twitter or any other social network, our team can help. Contact us today for a free consultation.

LinkedIn is a great business networking and lead generation tool, BUT sometimes you need to…

The word “personal” scares a lot of people. “I don’t want my personal information out…

© 2020 The Art of Online Marketing. All Rights Reserved.
Back To Top
×