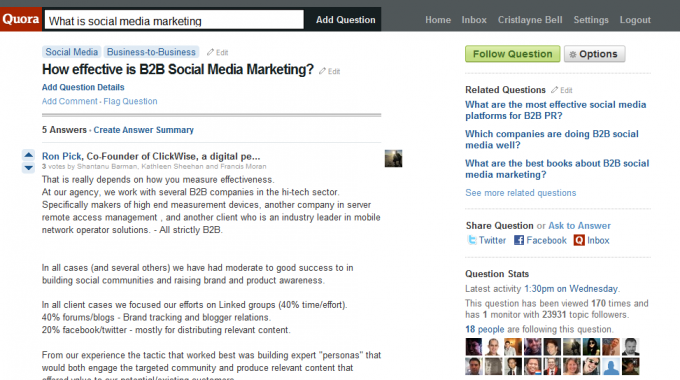 Questions about Quora? What do you get when former Facebook, Twitter and Google employees get together? Quora— a user edited Q&A-type social media site. The beta version of Quora was launched about a year ago and it was made available to the public in June. At first, the social media tool was used predominantly by techies, but it didn’t take long for others to start jumping on board. By the end of 2010 Quora experienced a large enough surge in users that it was listed in the Mashable’s top 10 websites to watch in 2011. How does Quora work? If you have ever used Yahoo Answers, you can probably figure out Quora. The concept is the same: Users post questions, other users post answers. The difference is Quora seems to be geared towards a business audience, where as Yahoo Answers welcomes everyone. It is a lot like LinkedIn Q&A, but more accessible. It reminds me somewhat of a no frills Twitter. Though some have expressed annoyance with the user interface, it is pretty easy to use if you are already accustomed to Facebook or Twitter. Should you be on Quora? Like any marketing strategy, it depends. Quora is still the new kid on the block and hasn’t reached the mass market yet. That’s both good news and bad news. If you are looking for a venue to showcase your knowledge, Quora might be a great place to stand out. Being relatively new, it’s less saturated than LinkedIn, Yahoo Answers, and Twitter – and posting on a site like Quora may still help you be found in the search engines. On the downside, your target market might not be there yet. Will Quora be the next big thing? My crystal ball is a little fuzzy, but the odds are stacked against it. Multiple Q&A sites have come and gone. But for now, Quora is a great site for professionals looking for and offering help. Its growing popularity will more than likely continue for a while.

Facebook founder Mark Zuckerberg, who was recently named Person of the Year by Time Magazine,…

The internet can be the best platform to market your company to a worldwide audience,…

Social Media and the Holiday Season

Ready or not the Holiday Season is upon us. The exciting and stressful time of…