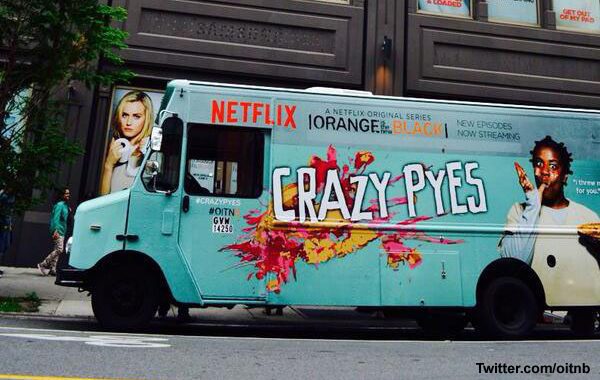 Netflix’s popular and incendiary series Orange is the New Black just released their second season this month, and it seems that orange will stay the choice color for quite some time.

It’s safe to say that OITNB has gathered enough fans and media attention to promote the season, but that’s not stopping Netflix from throwing some marketing money behind it.

Because when OITNB wins, all of Netflix wins.

A while back, we talked about the importance of focusing on one product or service when advertising your brand, and the case can’t be any truer than now. For the time being, Netflix has stepped back from advertising its monthly membership service, and going straight for the gold — promoting its original series instead.

And not only that, it’s promoting the series in a creative way — with a food truck serving free pies that’s set to tour in select cities, starting in NYC.

So what’s a small business to learn from this? Of course, you may not have the same marketing budget as Netflix may have, but there are some business lessons that can be learned here.

Have you seen any special and different local promotions for another small business? Or have you done anything interesting that the world should know about? Let us know in the comments!

Hold Yourself Accountable To Your Marketing Goals

If the Mayan’s were right, 2012 is your last chance to follow through on those…

3 pricing methods to increase sales in your business

Whether you’re struggling to meet sales goals for the end of the month, or thinking…

If you’re like most small business owners, you’re probably the only one doing the marketing…

Follow Us
3 Latest Articles
Categories
Archives
© 2021 The Art of Online Marketing. All Rights Reserved.
Back To Top
×
We use cookies to ensure that we give you the best experience on our website. If you continue to use this site we will assume that you are happy with it.AcceptPrivacy policy